In the backwoods of Finnish Karelia there lived a passionate hermit who shunned human contact. He had been living alone for many years, but not always.  His was a proud but lonely life.

One fall day the hermit was chopping firewood nearby his ramshackle sauna. He set aside his axe, wiped his brow and looked around. Honking geese flocked southward. Trees shed swarms of golden leaves. Chilly wind raked his barren berry patch. From the weedy creek-side path came soft footfalls and the scrunching of leaves. The hermit fondled his axe and pondered his gumption to split a human skull, but his visitor was not even human, just his neighbor Skinny Arno. 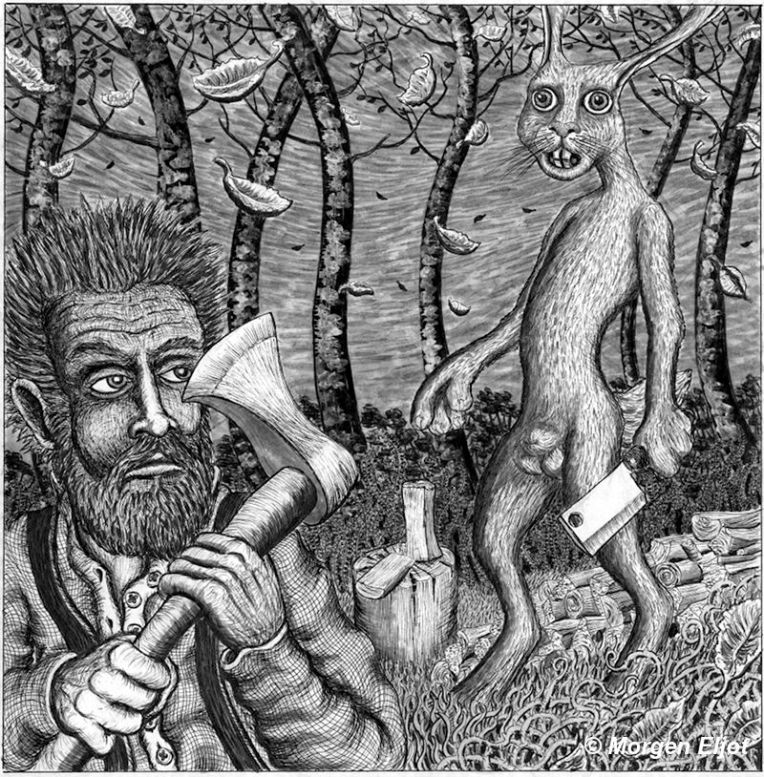 Skinny Arno was a man-sized Arctic hare with sad eyes and ratty fur and it walked upright on spindly legs and possessed forepaws with opposable thumbs that carried the rusty meat cleaver that Skinny Arno always carried. It could not speak but was able to scream and also knew passable sign language. It lowered its cleaver and gesticulated to ask the hermit if the hermit had any vodka.

“No. Yes. Maybe.” The hermit looked skyward through falling leaves and inwardly reproached his dreadful indecision. Sunlight glimmered coldly across the stratosphere to illume distant clouds: it was the Autumn Equinox. “A half liter of koskenkorva. We can drink it by the lake.” He kept his axe constantly by his side as he retrieved the bottle from beneath his sauna and maintained a safe distance as they sauntered to the lakeshore. He led his guest atop a granite jetty where he uncorked the bottle and took a swig of liquid fire.

The hermit watched the sun burn itself to cinders and felt sentimental. Recalling his past, he felt the giddy vertigo of one observing the earth from the surface of the moon. “Love, I knew it once. I keep forgetting to forget.”

He tossed a stone and the memories vanished.

Skinny Arno eyed the vanishing sun, forepaws resting palm-down on knobby knees. A mosquito landed on an ear. The ear twitched and the mosquito took flight. The sun disappeared without a sound.

The hermit swatted a mosquito off his wrist and there remained upon his palm a blotch of blood. “So many pesky parasites sucking us of energy.” He gestured gravely to conjure ghosts from his ponderous past. “Lodged forever in history like bugs in amber, the living and the dead.”

Skinny Arno perked up his ears and scanned the lake from right to left, looking for the hypothetical others. It saw nobody.

“At least they are unchanging,” said the hermit. “They’ll watch my back forever, but in truth I never looked back.”

The hermit lamented the life he’d abandoned, but only for a moment. He toasted his youth’s departure, took a swig and sighed, “Yet another autumn, nature’s rehearsal to prepare us for death. How many more? And how many before? Think of the endless chain of ancestors linked through time so we could sit here contemplating their absence. Think of that.”

Skinny Arno seemed unconvinced and vaguely bored. It was descended from an ancient pedigree of Nordic fear made flesh, the transubstantiation of nightmares dreamt by pagan Finns before the Christian conquest. When their children vanished it was Skinny Arno their mind’s eye conjured. 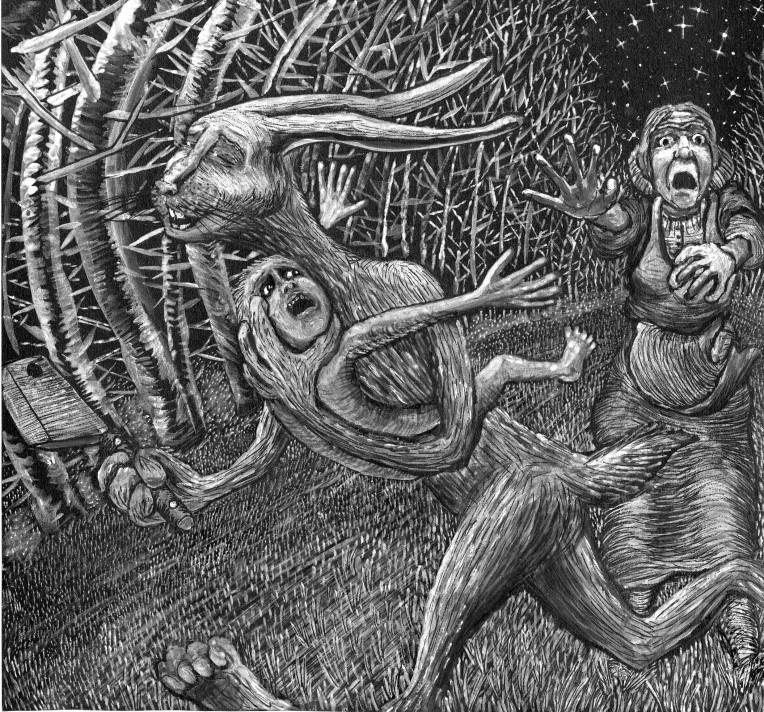 Across the lake a coo coo called to proclaim a stranger’s passing. Overhead the sky darkened to display innumerable pinpricks of starlight, phantom suns in a boundless vault.

The hermit was accustomed to silence but this quietude was deafening. “Times like these you almost feel, just for a moment, the possibility of God. But then reality slaps you in the face.”

The hare’s head pivoted to the side, its yellow eyes unblinking. It looked away.

The hermit drank some more. “Why so many questions? There’s only one answer. There’s nothing at stake, nothing to be afraid of.”

Skinny Arno looked at the hermit with trembling whiskers. The universe without you is no universe at all. The hermit smirked. The vodka was strong. Pity it was almost gone. The hare made a thirsty clicking sound so the hermit passed the vodka. It drained the bottle and gave it back.

The hermit rose up like an angry man but there was no anger in his soul, just formless fear and dread. He held the bottle to the dying light and turned it upside down – one droplet hit the lake like a lifetime to eternity. 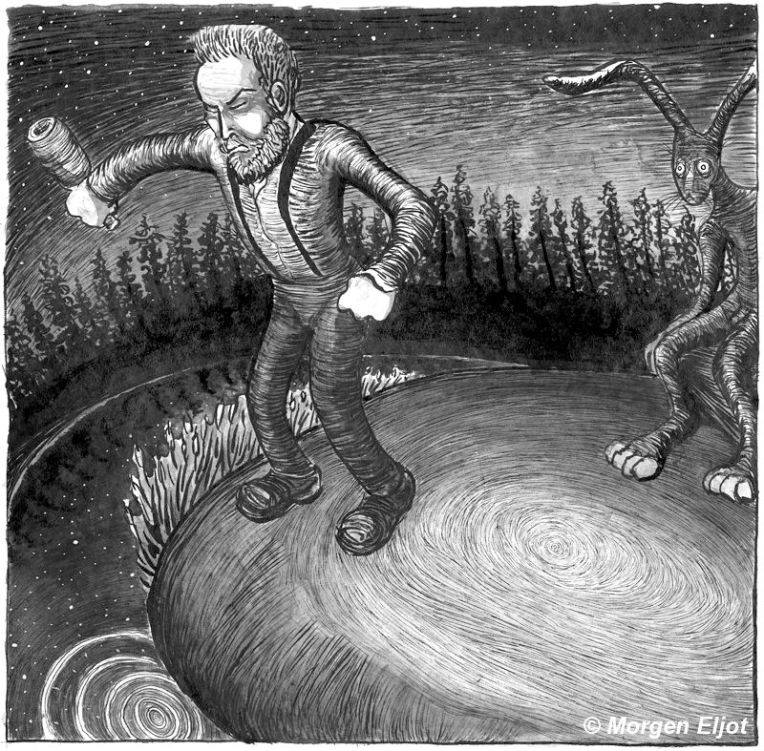 “It’s no matter, what’s lost is less than nothing.” The hermit tossed the bottle and the lake replied with a splash. 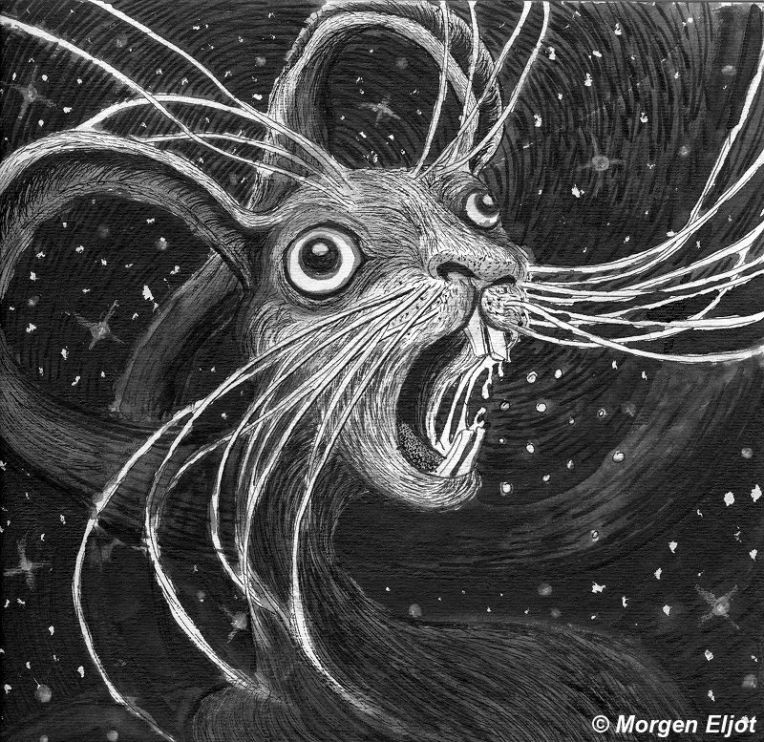 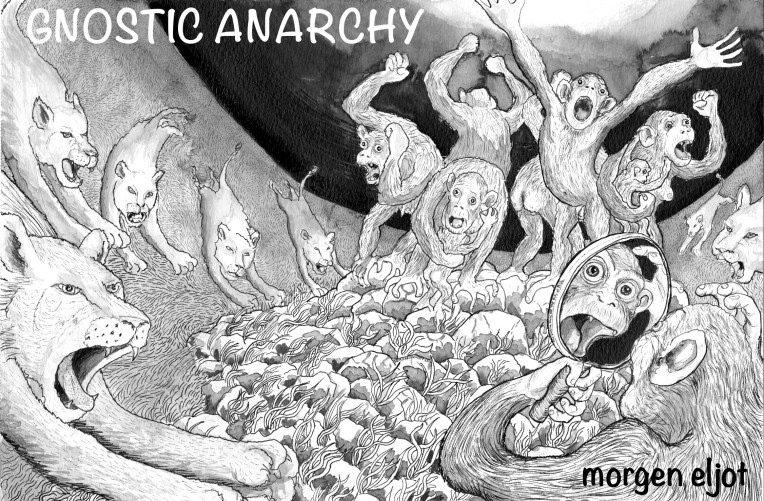